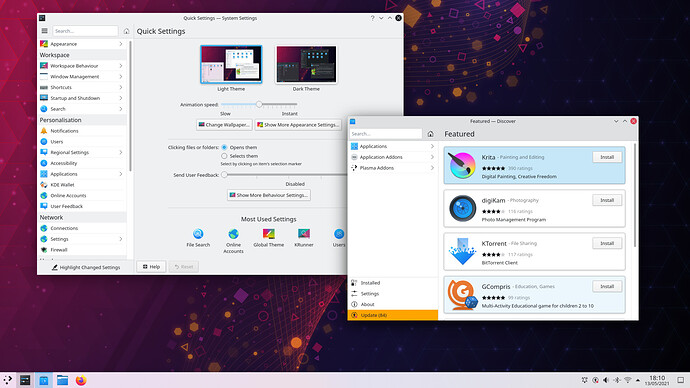 This is the Beta release of Plasma 5.22. To make sure that end-users have the best possible experience with Plasma 5.22, KDE is releasing today this test version of the software. We encourage the more adventurous to test-run it and report problems so that developers may iron out the wrinkles before the final release scheduled for the 8th of June.

Plasma 5.22 is gearing up to be a leap forward with regards to stability and usability. Developers have concentrated their efforts on ironing out hundreds of bugs and removing paper cuts, while also tweaking details. The aim of Plasma 5.22 is to allow users to become even more productive and enjoy a smoother experience when using KDE’s Plasma desktop.

DISCLAIMER: This is beta software and is released for testing purposes. You are advised to NOT use Plasma 5.22 Beta in a production environment or as your daily desktop. If you do install Plasma 5.22 Beta, you must be prepared to encounter (and report to the creators) bugs that may interfere with your day-to-day use of your computer.

Read on to find out more about Plasma 5.22 Beta: