I’ve seen lots of posts like this in the past, never thought I’d be writing one myself.
I haven’t been very actively contributing to KDE for the past months. It’s been rather frustrating, because I felt like I have to contribute something, fix some bugs, finish some feature…but whenever I had the time to work on PIM, I just couldn’t bring myself to do anything. Instead I found myself running away to other projects or just playing games.
It took me a while to realize that the problem was that I was putting pressure on myself to contribute even though I did not feel like it. It turned from hobby and passion into a duty, and that’s wrong.
I think the main frustration comes from the feeling that I cannot innovate - I’m bound by various restrictions - libraries and languages I can use, APIs I must preserve/conform to, legacy behavior to not break anything for existing users… This has been taking away the fun. I have enough of this in my dayjob, thank you. So….
I decided to take a break from KDE PIM for a while. I’m sure I’ll be back at some point. But right now I feel like I gave it all I could and it’s still not where I’d like it to be and it’s no longer fun for me. What makes me very happy is the number of new contributors that have appeared over the past year or so.
Instead of hacking on KDE PIM I went back to some of my older projects - I improved Passilic, the Pass password manager frontend for Sailfish OS and revived my old Android app to sync Facebook events with Android calenar.
I also started playing with C++20 coroutines and how they could be used with Qt. The result is the QCoro library. I’ll blog about that soon and, hopefully, will talk about it in more depth in two months on Akademy (see, I’m not leaving completely

).
Finally, I spent the past week building a remote-controlled car using Lego, Arduino and a mobile app I wrote (with Qt, of course 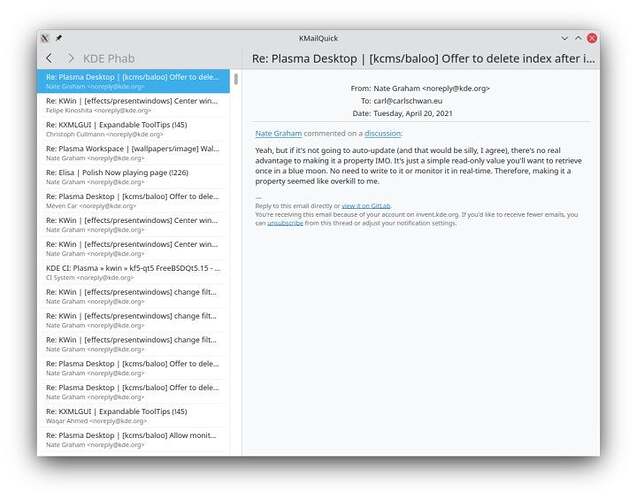